" I- Am- Push-Ing" I growled painfully 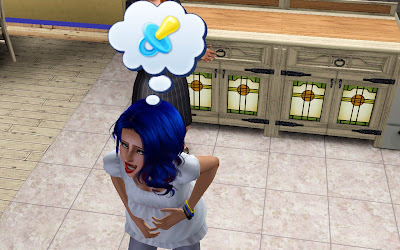 " Just... Take deep breaths! That's right, breathing... Breathing is good, always breathe" Debbie gasped. I glared at her, if I wasn't in labour I would feed her the cat, then demand that she regurgitate it. Then report her to the police for animal cruelty.

" Just SHUT UP!" I yelled with the last of my energy " I have done this before!" I shouted at her as she breathed in and out of the paper bag that she had originally intended for me. " That's... my paper bag... Why are you using my paper bag?... It's mine"

She looked down at the full bag in her hand " That's yours isn't it..." She shifted " s-s-sorry Electra, I didn't realize" She didn't look at me. But I am pretty sure she could feel my evils through her skull.

" You just wait, when you go to sleep I will-" a burst of pain silenced me. It was time.

" What are you going to call him?" Asked Debbie

" Fletcher and I are not talking to you" I turned away 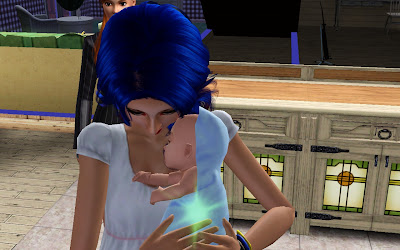 " Fletcher..." She rolled the name around in her mouth. I don't think she took the hint

" It's OK Fletcher, you will understand when you get older. We are not speaking to her. She stole my paper bag" I whispered into his ear. I looked at Debbie again, she stared back expectantly " Fletcher says that We will have a magnificent garden party, and you are not invited" She looked at my child, and as my heir would: He stuck his tongue out at her 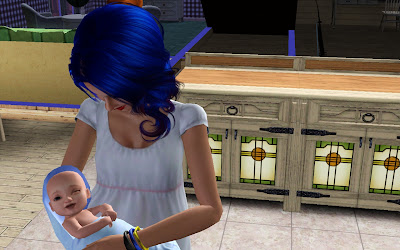 " Definitely yours" Debbie never took her eyes from Fletcher.

The door bell rang.
I wondered dreamily to it. I went to grab the handle, however before I could turn it, it did it itself. Magic was my first thought. But no, instead of Merlin the wizard, a rather more interesting person emerged. 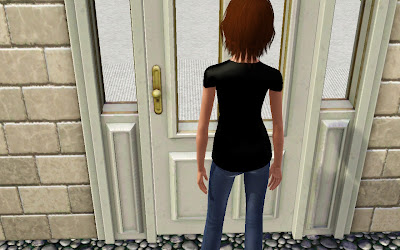 " Well hey there Electra!" She shouted in my face " Look at you! Look at your house! Is that your child? I want a cookie, can I have a cookie? Cookies are good, almost as good as grass, like grass me. Where do you stand on grass? I mean obviously you stand on grass, but that's not what I mean..." She barged past me 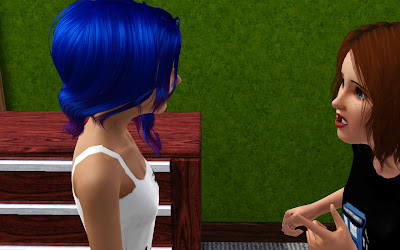 " Loren?" I tried to get a word in as she drifted through the kitchen, pulling out various items from my cupboards " Why are you here?"

" Want to come to mine?" She asked out of the blue " Well.. I say mine, it's a friends, but it's OK I practically live there anyway"

" We-" She pulled me by the arm out of the door and into a taxi. She worked fast.

We arrived at a quiet place, outside of the city. An ordinary looking village. Next to a supermarket, the best type. Loren grabbed my arm and once again, dragging me to a door. Next to it a number 9. 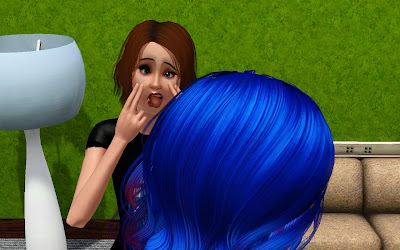 " Welcome to the bedroom!" Loren bounced

" Is it your bedroom?" I asked curiously

" Would you believe me if I said yes?" She laughed. And if I am honest, I wouldn't and therefore I didn't. I had met her many years ago, she followed me home, claiming that a caravan with wings was telling her to do so. She was odd. And anybody that odd, was not pretending. Strange child.

" Come in!" She shouted at me, she had moved from my side, into the bedroom. It was filthy. She sat on the bed at the over side of the room.

" Is that your computer?" I asked as she typed away, humming an un-translatable song.

" So, Loren... Would you care to tell me, exactly who this house belongs too?" I heard the door swing open and the sound of voices

" Why don't you ask her yourself?" She grinned. The door to the bedroom swung open and in walked a girl, a girl the same age as Loren, or appeared to be anyway. She didn't look all that dissimilar to Loren, except her hair colour.

" Loren..." The girl began " What are you doing on my computer? Are you pretending to be me on Facebook again?" Her face changed " I will gag you... And who is this!?"

" You don't have any friends Loren" Sarah said to her " Other than me, and mind Loki. Forget that actually mind Loki said you look like a baboon" She looked at me " If she is holding you prisoner, just run, I will fend her off" I didn't move. In all the commotion I didn't notice the two people to follow Sarah in. Loren did. 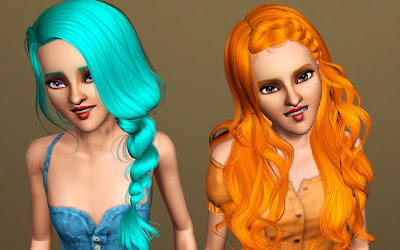 " Who are the colourful peeps!?" Loren leaped up and ran towards the visitors, looking excitedly at them.

" The blue one is Skye... Skye isn't it?" She looked at the one she called Skye " And the orange one is Paisley" She waved at Loren, then at me.

" We needed to use the toilette" Paisley said in an American accent. I like Americans, they made jerky, and so that makes them cool, like jerky. 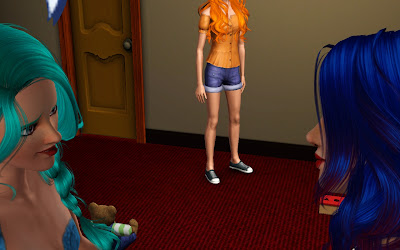 Paisley was the first to approach me. She took my hand and simply said " Paisley, Paisley Parker, pleased to meet you Electra..."

" Pleased to meet you Electra Danton- Cool hair by the way"

" Thanks" Was all I could say before Skye approached me. She looked at me then tilted her head

" Lecci" She said, still in deep thought " I am gonna call you Lecci" She smiled at me " I also agree with Pais- you do have cool hair" I beamed back at her. I know where I had seen her! 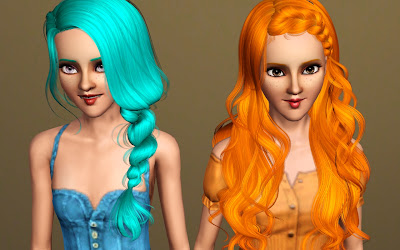 " You are THE Skye and Paisley! The challenge mothers!" I practically bounced up and down with excitement.

" The one-" Said Skye
" And only" continued Paisley

" Cool!" I shouted, I instantly regretted it, I could think of far better things to say

We had gotten ready by 8:00 pm. I was wearing a pair of shorts, with a pretty top, Paisley was wearing a pretty orange t-shirt ans Skye, was looking magnificent in a pretty dress. We begun the night sober. Something that Paisley warned, would not last for long.

A few drinks later Skye and I were really hitting it off. The night is very vague, and therefor it is a little abstract, here are the 'out-takes' of the night

My speech had become slurred " Hey Shkye- Ma nexsht kiddie shall be called Carrot, becush, Carrot ish a nish fruit, sho the kid would be nish too am I right?"

" That's right Skye, you are the great god Loki" Shifted Paisley " Now isn't it time to go home? You have had quite enough to drink"

" I think that she has had more..." Skye pointed at the unconscious me on the floor

I awoke in the arms of Paisley, alongside Skye who was singing the complete album to Phantom of the opera. I threw up on Paisley's shoes. I would usually apologize for this, but crazy-alcohol has running things so is laughed " Look! Now your shoes are the same colour as your hair!" I once again passed-out. For good this time.

I was awakened by an all too healthy Skye. As I opened my eyes, my head began to pound

" My head hurts" I complained

" How are you walking around? You had more to drink than I did" I moaned

" Just practice I guess, but do you want pan-cakes?"

I stumbled down-stairs. And the smell of fresh pan-cakes hit me. I breathed in the scent, savoring it. The pan-cakes were quickly devoured and Skye began speaking

" Well Pais and I will be leaving soon, you know babies to have and such"

I didn't want them to go, and I still had to know what happened last night.

" Yo want to know what happened last night don't you?" Skye said. I was amazed, she had read my mind o.O " Well we went to see Phantom in the theater then we went to the bar, we then took Paisley to a sweet shop- just to watch her head explode. Then you passed out" I never knew what could happen when I was drunk. Now I do.

Skye froze " Why do you want to come to the States?"

" Come on Skye? Have you ever heard of an English challenge mother- that is still in England?"

" You will keep our journey interesting." I was so happy, a new life. In the states.

"Come on Sarah!" I shouted to her up the stairs " The flight leaves in an hour!"

I tossed Fletcher in the air and he giggled with glee. I looked around the house that I had lived in for so little time. I would not miss it. My stomach lurched, something was not right, Sarah came bounding down the stairs, suit-case in hand. She had aged up so beautifully. 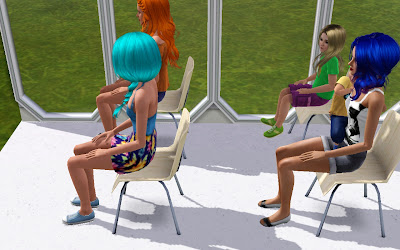 The flight was crowded, and Skye was singing out loud. Every word clear, Masquerade! Was the loudest, it turned a few heads. My stomach Hurt so bad.

" Just a bit of a stomach ache" I replied

" Your pregnant" She said calmly. WHAT!?

I managed to keep my voice quiet " What do you mean I am pregnant?"

" I forgot to tell you, you got laid last night, by a strawberry, well not a strawberry as such, but he looked like one" That's when the realization hit me

" Oh my goodness! Where am I going to live!?" I panicked 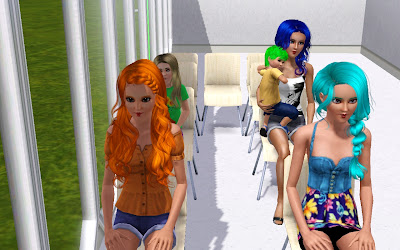 Skye tossed me a key " All sorted, you have a nice little house, big enough to raise a family, not too far from mine, but far enough that you won't bother me"

The house was perfect. All that I had ever wanted was right here, in the USA. My bump was really starting to show. And I had everything that I could possibly dream of.
Posted by Violet Everly at 06:16