I wasn't ready to wake up, not ready to say goodbye to my husband- and my bestfriend. The night that we had just spent together was the best in my life. But no; I was going to stay in bed for a little but longer, this moment was too precious to pass.
Mofussa however, seemed to have other ideas.
As I attempted to drift back off he jumped, landing right on my hip. 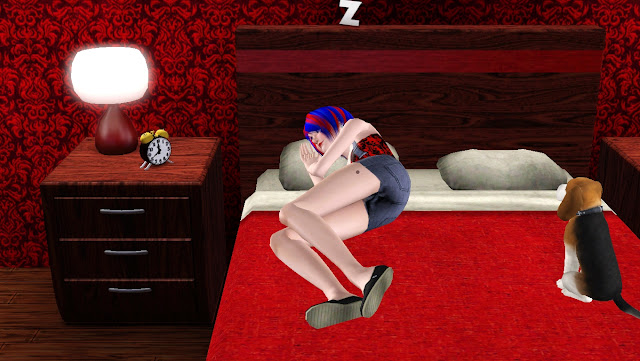 " Woof!" His paws wobbled on my bony hip.

" Go away" I mumbled sleepily.

" Leave now mewling quim!" I yelled at him. I was tired after all.

But no, not even my Loki-rage could deter him. Instead he got out his tongue, to lick my face. His wet tongue melted over my cheek and slid around like a slug.

" Ew!" I jumped up " Ew, ew, ew!" I pushed the covers away and leaped out of bed " EWWWW!" I ran to the bathroom and wiped my face. Through the mirror I saw Mofussa walk in, looking all innocent. Pfft yeah right.

" Honey?" I heard Alexander call from somewhere downstairs " Honey, are you awake?"

I heard him laugh faintly " Well, come down here you numpty!" 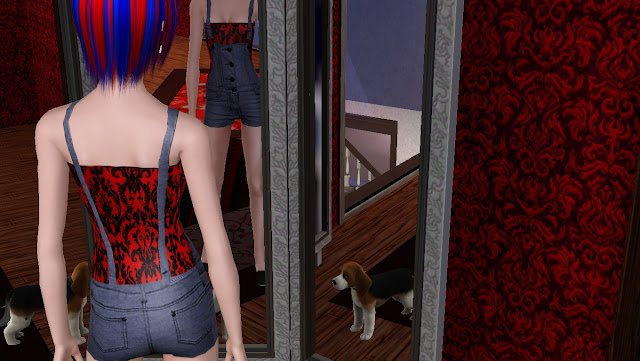 I glanced at myself in the mirror one last time, before making my way out. Mofussa not taking the hint, followed.
It hadn't taken long for me to settle in this new house, and I liked it. It was big, certainly spacious enough for the challenge. But best of all; I had paid for it all by myself, no favours or pity needed. It made me feel good to at last stand on my own two feet.
I was particularly surprised at how fast Mofussa settled in too, they say that it should take a while for a dog to get used to a new home... Not Mofussa, my little ninja pup.

After all of the stairs (ugh, the many stairs. I missed the simple one staircase house I used to have)
I met Alex at the bottom. He stood at the bottom step, waiting patiently. I couldn't help but notice that his adorable smile had grown as he saw me. It made me feel special.

" What took you so long?" He asked as he walked by my side to the kitchen. 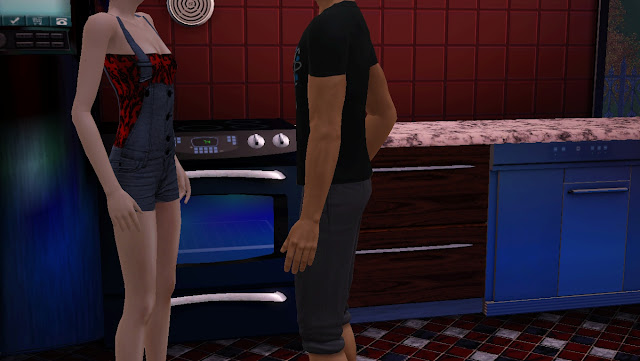 He laughed briefly " That's Mo for you"

A slight bang from the bottom floor caught my attention, and apparently Mofussa's. The quiet sound of an angry Brit cursing reassured me, it was just Arthur.
Mofussa leapt down the stairs, taking three at a time. " Ah Crap" I heard Arty say loudly, probably as Mofussa's little face peeked around his corner.

I jumped to attention " Definitely" I giggled.

The kettle rumbled, spurting steam all over the cupboards. A slight clink as Alexander put the two cups down on the side. Tea was ready.

I smiled at him " Really great actually"

" Good" He grinned. Then he kissed me with warm, wet lips.
He looked a little sad for a moment.

" Are you okay?" I asked him, placing my cool hand on his arm 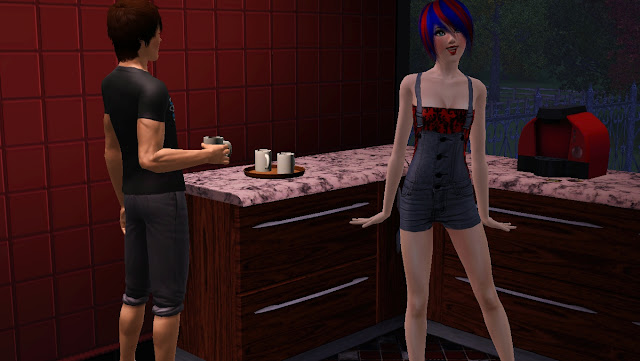 I looked into my eyes, making me blush " Yeah, I guess it is just kinda hard to be happy when I'm going to be leaving you, my love, while I go out and fight"

Of course, I thought to myself, how could I forget? Today is the day that he goes to serve his military duty.

I smiled sadly. Alex must have noticed, because he took a step toward me and lifted my chin with his finger " It's Okay" He said to me " I'll be back before you know it"

" Yeah" I spoke quietly. I kissed him lightly " I love you" I smiled in his face

" I love you too Lecci" He replied, pecking my lips

Arthur walked into the kitchen " Ehem"

We both looked at him, waiting to find out why he was interrupting us.

" Just had a phone call" He began " It's the military, they said that they're on their way" He looked to me expectantly

Alex let go of my waist and sighed. He walked over to the sink and swelled out the cups, before leaving the kitchen. Just as he disappeared around the corner he popped back " Just off to get my uniform on, be right back babe" he vanished once again.
A sudden lurching doubled me over, I ran to the bathroom to throw up, that could mean only one thing...

" Are you okay?" It was Arthur, standing in the doorway. 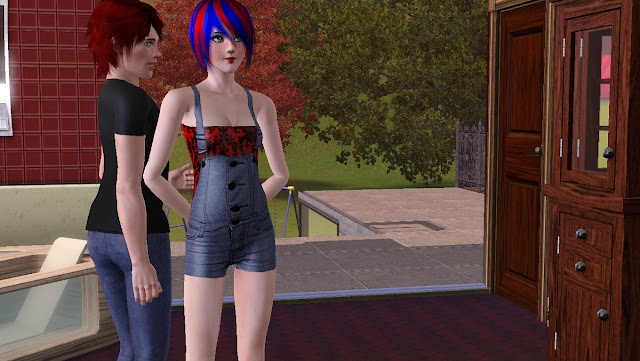 " Yup" I wiped away the grime with my wrist

He walked up to me and looked into my eyes, we were really close " This can't be easy for you" He placed his warm hand on my back " Are you okay with this?"

He raised his brow at me " Sure, I believe you"

I gave him a big hug, swinging my arms around his back " You know me too well" We embraced for a moment before letting go. I didn't tell him what was really going through my head, and I probably wouldn't. He didn't need that burden on him too, I'm his friend after all, and friends would never hurt another.

Arthur spoke again " Now come on, we need to go wave off your husband"

I nodded silently, walking slowly out of the bathroom.
I almost tripped head first over Mofussa, who was laying broadly at the door. He looked a little off. 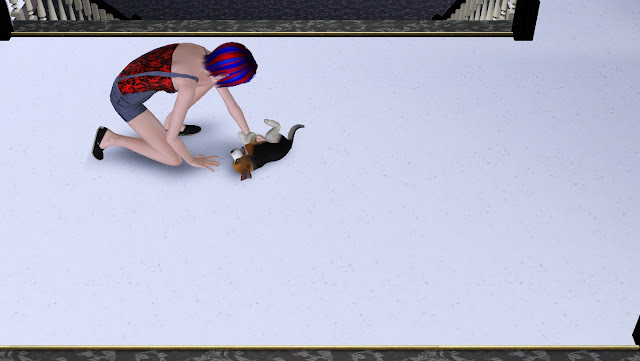 " You okay Buddy?" I bent over to pat his head lightly.

Arthur bent next to me " He's been a bit odd lately, I mean" He sniggered " More odd, he doesn't seem to be that lean-mean-toe-nibbling-machine I used to know"

" I'll take him to the vets later" I said to myself, just for a check up, make sure everything is okay for my little Mo.

I heard thudding as Alex came downstairs. When he reached the three of us he smiled and gave a many, yet majestic twirl. " What'cha think?" 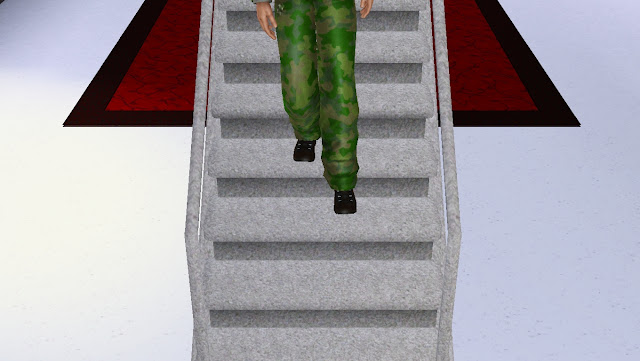 I stood up and went to tweak his collar " Like my little solider" I kissed him on the lips. I remembered something important, something that he had to know " Alex" I began "there is something I have to tell you-"

I was interrupted by the loud honking of a large, camouflage truck at the bottom of the drive. Alex jumped, kissing me on the cheek " That's my ride"
We walked to the doorstep. The wind was cool, but the day was fairly warm. 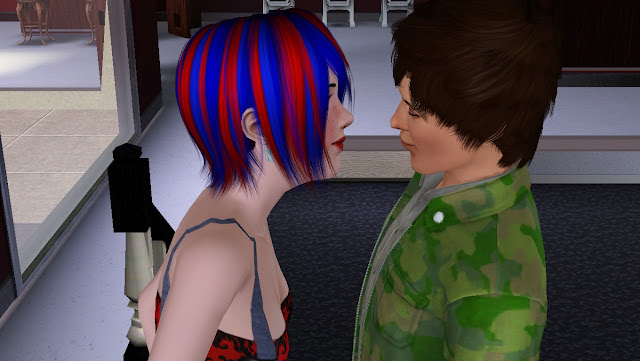 " Bye bye my love" He smiled

" You don't get away that easily" I jumped into his arms, kissing him, making sure that the moment wouldn't end quickly.
He pulled away.

" Not that I don't want to kiss you for eternity" He smiled " Trust me, that is exactly what I want.." He turned " But I really must go, I don't know how long that truck will stay"

He kissed me one more time. Then turned to walk away.
He had just got to the bottom of the path when it came to me, I had to tell him, he had to know. 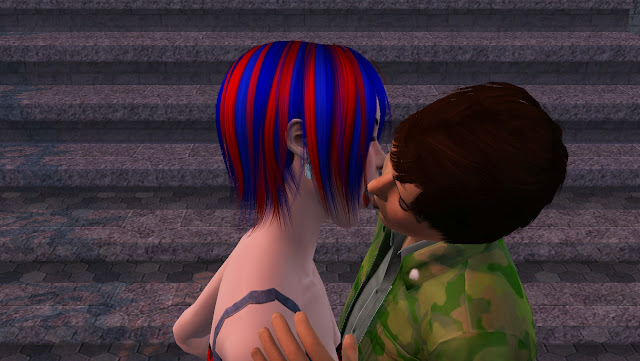 He turned and cupped his ear with his hand

He nodded " Tenant?" He yelled back

I shook my head, he walked on " PREGNANT!" My voice cracked

He had just climbed into the truck, I saw his face light up, he must have heard me. He blew a kiss as the truck drove away into the distance, he did hear me... didn't he? 'I love you', I thought.
I turned fast, not realizing that Arthur was stood there. I subconsciously slipped into his arms, weeping into his chest uncontrollably.

" It's okay" He whispered, stroking my hair " I'm still here"

I sniffed in, not wanting to remove my head from its fleshy pillow. But I pulled away nonetheless.

" It'll get better, I promise" He said

" You promise!?" I was distraught " I am sick and tired of promises!" I cried " Like Alex promised to be with me forever, like my parents promised to look after me" I stopped myself from saying anything more. I breathed in deeply to calm myself.

Looking up at Arty I saw how concerned he was, I think that I hurt his feelings, I knew that I shouldn't have yelled like I did, but I lost control

" No" He backed off, not allowing me to go near him " No, I get it" he turned and walked upstairs 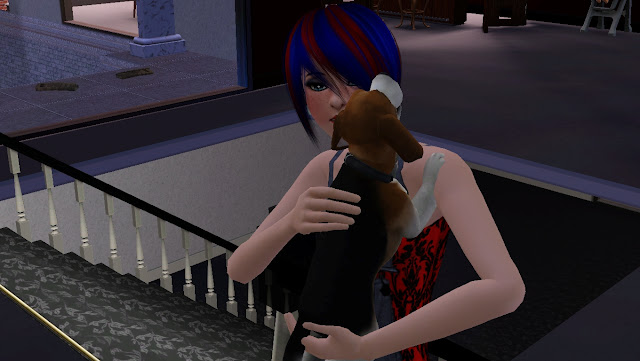 He carried on up the stairs until I couldn't see him any longer.
I looked down at Mofussa, I had to get him to the vet, I remembered. I looked back at the place where Arthur once was, wondering if I should go after him or not. I decided against it, Mofussa's appointment was more important.
I picked up the little fluff ball and carried him to the car " Jeez" I said to him " You're getting heavy"
He cocked his head slightly.
As I drove Mo poked his head out of the window, flopping out his tongue and letting the wind dry it out. When we got there we sat at the reception area. The whole room was furbished white, with posters on pet health patched around randomly. Sat next to me was a funny looking three legged cat and a one-eyed dog. Very odd pairing.

I turned to my dog and whispered " It could be worse"

He barked in agreement

The door to the vets office swung open, allowing a petite assistant to enter. " Mofussa Danton?" She called out in a voice which didn't suit her figure.

" Just come on in" She said cockily. I didn't like her.

I walked in scowling at the assistant. I placed my dog onto the vets table and sat in the seat provided. I let the vet do his job.

He fondled with hos belly and took his heart rate.

" Right" Said the doctor, placing the heart-thingy back onto his own chest " It appears as if your dog is pregnant" He said calmly

My mouth fell to the floor " You can't be serious?" 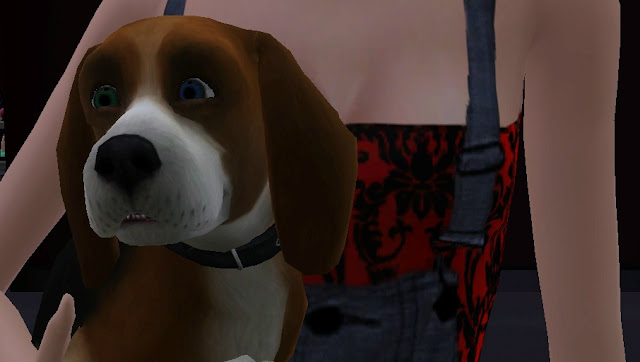 " Crud" Was all that I said. I didn't know what else to say.

I walked out with Mofussa on his- or should I say her leash, I wasn't too impressed. The reason that I got a male dog was so that things like this wouldn't happen. Well, that'd be karma, getting me back for abusing Skye.
When I arrived back home all of the lights were out, I presumed that Arthur had opted for an early night, so I unlocked the door and walked inside. 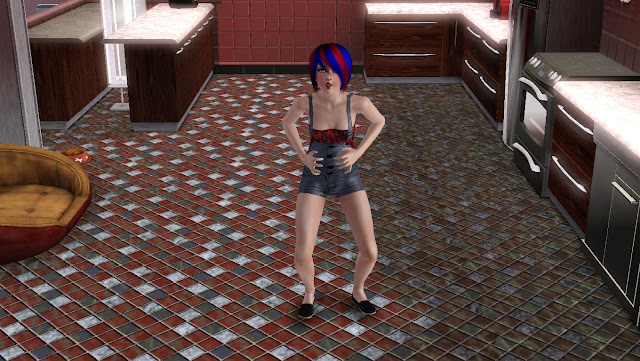 I plonked my keys onto the side and went into the kitchen. I needed caffeine, too much crap had happened today.
My tummy pulled me down, causing me to drop my cup. I was in labour.
I screamed for Alex without return, I needed him now, I was going to giving birth to his kids, without him. 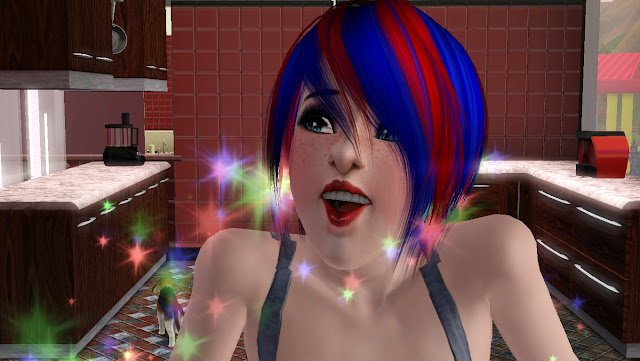 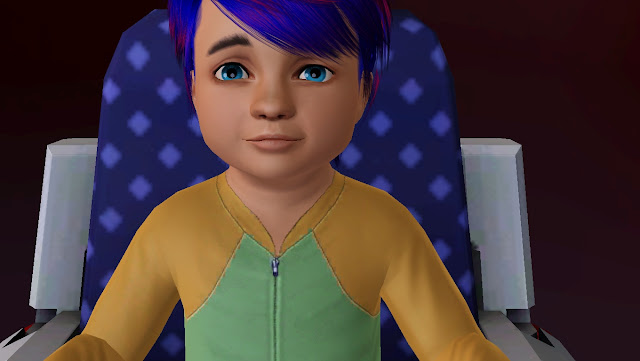 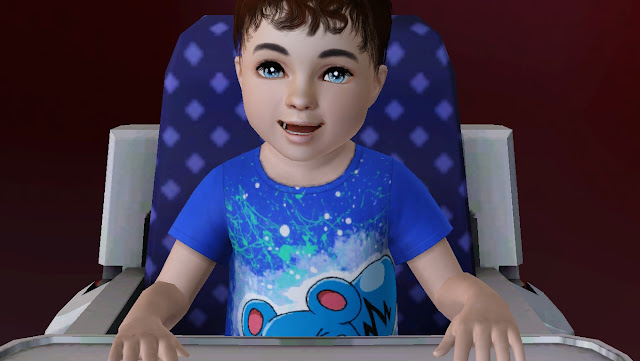 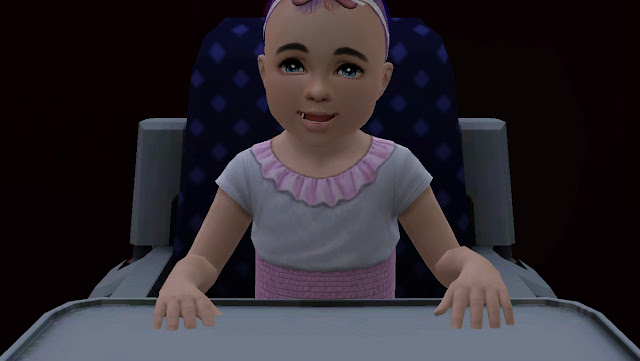 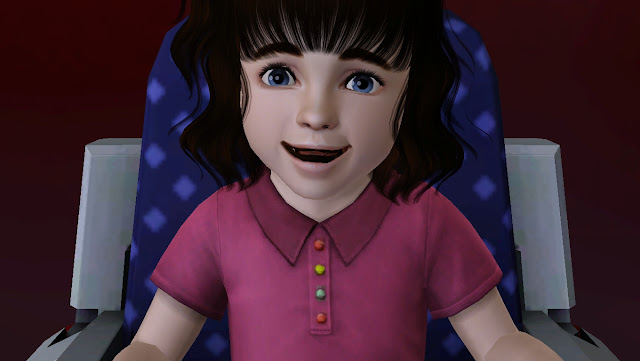 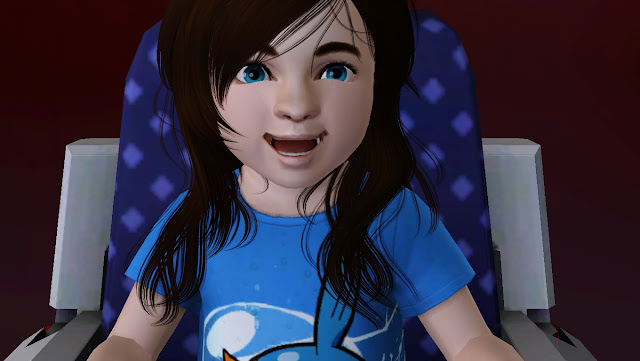 I was keen to age them up straight away, so that I could look after them easier. I was happy now that the house was full of kiddies again, running around and creating mess. It cheered me up a little, but not even the babies could fill the gaping hole created by the loss of Alex.

THANKYOU FOR READING PEEPS!
LEAVE A COMMENT BELOW AND TELL ME WHAT YOU THINK!

HAVE A NICE DAY,